How Do I Un-Remember This? 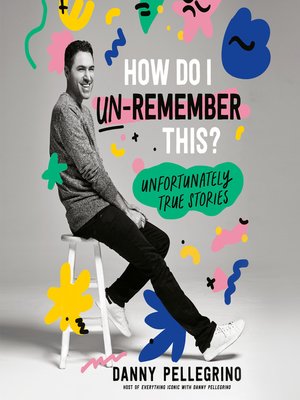 View more libraries...
From Danny Pellegrino, creator of the hugely successful podcast Everything Iconic! Stories that will make you laugh, cry, and dig up all your awkward middle-school pictures.
Growing up in small-town Ohio isn't easy, particularly when you're a closeted gay kid surrounded by... no one openly gay. Luckily, Danny Pellegrino grew up in the '90s, coming of age when the internet opened up a whole new world for a curious kid itching for life outside of Midwest suburbia. Danny escaped the pains of growing up by submerging himself in a sea of pop culture—bingeing The Nanny until he had the confidence of Fran Fine, belting out Brandy songs until his heartaches were healed, and watching every semi-clothed Ryan Phillippe scene known to man.

Now, as a successful podcaster interviewing the same iconic personalities that he idolized as a kid, Danny's life has only become more entertaining and delightfully chaotic.

Heartfelt and hilarious, How Do I Un-Remember This? is a collection of real-life stories exploring Danny's journey from feeling like the only gay kid in Ohio to becoming a big-time podcaster in Los Angeles, and all the amusing moments life threw at him in between. With remarkable honesty and his trademark humor, Danny discusses his struggles alongside his love for all things pop culture in a way that is equally emotional and uplifting. And of course, it's all sprinkled with a little '90s nostalgia and a whole lot of comedy.