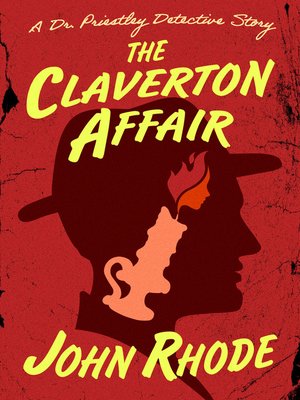 View more libraries...
A scientifically minded professor is stumped by a case involving séances and an inexplicable inheritance . . .

After drifting apart from Sir John Claverton, Dr. Lancelot Priestley is finally visiting his old friend for dinner. But Claverton's situation is worrying. He's surrounded by relatives, among them a sister who speaks to the dead—but not to him—and a niece who may or may not be a qualified nurse. Based on Claverton's odd behavior, Priestley and a mutual friend suspect that someone is slipping him arsenic.

But when Priestley discovers that Claverton has died just a week later and shares his concerns with the police, no trace of arsenic—or anything else untoward—is found during the autopsy. Still, the perceptive professor can't shake his sense that something isn't right, and Claverton's recently revised will only adds to the mystery . . .

"The puzzle is sound, the atmosphere menacing in a splendidly gloomy way." —Jacques Barzun and Wendell Hertig Taylor, A Catalogue of Crime

"You can never go far wrong with a Dr. Priestley story." —The New York Times