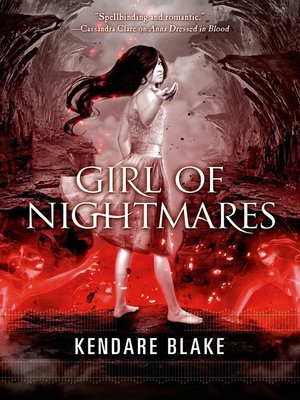 Girl of Nightmares is the thrilling sequel to Kendare Blake's critically acclaimed Anna Dressed in Blood.
It's been months since the ghost of Anna Korlov opened a door to Hell in her basement and disappeared into it, but ghost-hunter Cas Lowood can't move on.
His friends remind him that Anna sacrificed herself so that Cas could live—not walk around half dead. He knows they're right, but in Cas's eyes, no living girl he meets can compare to the dead girl he fell in love with.

Cas doesn't know what happened to Anna when she disappeared into Hell, but he knows she doesn't deserve whatever is happening to her now. Anna saved Cas more than once, and it's time for him to return the favor.

Kendare Blake holds an MA in creative writing from Middlesex University in northern London. She is the critically acclaimed author of Anna Dressed in Blood, Girl of Nightmares, and Antigoddess. She lives and writes in Lynnwood, Washington.

More about Kendare Blake
Girl of Nightmares
Copy and paste the code into your website.
New here? Learn how to read digital books for free