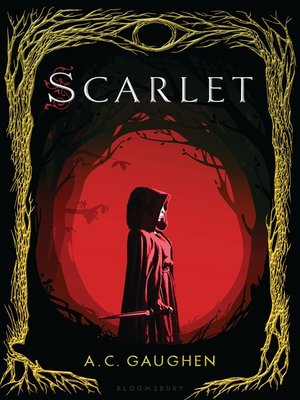 MythologyYoung Adult FictionYoung Adult Literature
Robin Hood is given a fresh, feminine twist in this romantic retelling from the point of view of "Will Scarlet"

Scarlet is good at keeping secrets. To the people of Nottingham, she's Will Scarlet, the young lad who protects those who cannot protect themselves. To Robin Hood and his band of thieves, she's the girl with a tongue as sharp as her knives. But nobody knows the truth about Scarlet's life before Nottingham—not even Rob, whose quick smiles have the rare power to unsettle her. And when someone from her past comes hurtling back into her life, everything she's fought for is suddenly at risk, including her own life . . .

Don't miss these other books from A. C. Gaughen:

A.C. Gaughen is also the author of Scarlet, Lady Thief, and Lion Heart. She serves on the board of directors for the non-profit Boston GLOW to make sure young women have the support they need to become powerful leaders in their communities. She ha...

More about A. C. Gaughen
Scarlet
Copy and paste the code into your website.
New here? Learn how to read digital books for free