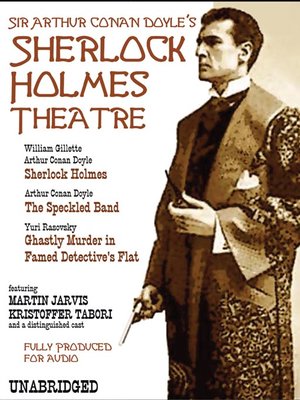 Blackstone is pleased to present the first ever audio recordings of the only two Holmes plays written by Sir Arthur Conan Doyle. This specially commissioned production by the Hollywood Theater of the Ear is a unique, must-have audio for all Sherlockians.

In Sherlock Holmes, Professor Moriarity, the Napoleon of crime, plots with would-be blackmailers to have Holmes killed. And the normally love-proof Holmes falls for an exceptional woman.

What is the secret of the shocking death of poor Enid's sister, whose dying words were, "the speckled band"? Only Holmes can find the answer and save a helpless girl from certain death in The Speckled Band.

When Holmes retired, it created a financial crisis for his friend Watson, who owes money to mobsters who want either their cash or his blood. The surprising upshot is: Ghastly Double Murder in Famed Detective's Flat, a one-act comedy by producer-director Yuri Rasovsky, here receiving its audiobook premiere.

William Gillette (1853–1937) was an actor, playwright and stage manager in the late nineteenth and early twentieth centuries. He is best remembered for his adaptation of Sir Arthur Conan Doyle's Sherlock Holmes.

Sir Arthur Conan Doyle (1859–1930) was a writer and physician most noted for his fictional stories about the detective Sherlock Holmes, which are generally considered milestones in the field of crime fiction.

The Sherlock Holmes Theatre
Copy and paste the code into your website.
New here? Learn how to read digital books for free