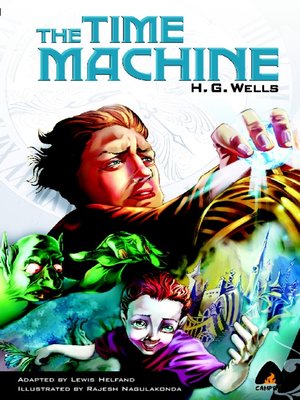 What would you do if you could travel in time?

An intrepid adventurer, known simply as the Time Traveller, meets his friends for dinner one night. During the conversation, he baffles them with his wild ideas about moving forwards or backwards in time. His claims are met with disbelief.

Even when he proves his theory with a real-life xperiment, his associates simply claim that he is a trickster – a magician. A week later, he enthralls his acquaintances

yet again. He tells a story so unbelievable that it cannot be true... or can it?

The Time Traveller's tale tells of our courageous explorer's discoveries in another time. Does he find intelligence and technology beyond his wildest dreams? Or is the world filled with dreaded monsters? There is only one way to find out...

Lewis Helfand was born in 1978 in Philadelphia. Passionate about comic books, Lewis soon published his very own, Wasted Minute – a story of a world without crime where superheroes are forced to work regular jobs. With the first issue received well...

Considered one of the pioneers of science fiction, Herbert George Wells was born in England on 21st September 1866. At the age of eighteen, Wells joined the Normal School of Science in Kensington where he was taught by T H Huxley.This was a crucia...

More about H. G. Wells
The Time Machine
Copy and paste the code into your website.
New here? Learn how to read digital books for free