ebook ∣ The Decline and Fall of the Roman Empire (Abridged); Montcalm and Wolfe; History of the Conquest of Mexico; The Naval War of 1812 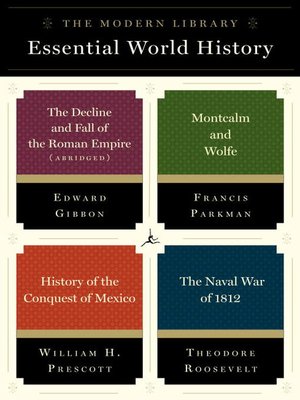 View more libraries...
Revisit a world of conquest, exploration, and imperial adventure with this Modern Library eBook bundle that includes Edward Gibbon's The Decline and Fall of the Roman Empire, Francis Parkman's Montcalm and Wolfe, William H. Prescott's History of the Conquest of Mexico, and Theodore Roosevelt's The Naval War of 1812.

THE DECLINE AND FALL OF THE ROMAN EMPIRE (ABRIDGED)

Edward Gibbon's masterpiece, which narrates the history of the Roman Empire from the second to the fifteenth centuries, is widely considered the greatest work of history ever written. This abridgment retains the full scope of the original, while emphasizing elements ignored in all other abridgments—in particular the role of religion in the empire and the rise of Islam.

The result of more than forty years of passionate research, Montcalm and Wolfe is the epic story of Europe's struggle for dominance of the New World. Thought by many to be Francis Parkman's greatest work, it is a riveting read and an essential part of any military history collection.

HISTORY OF THE CONQUEST OF MEXICO

William H. Prescott's sweeping account of Cortés's subjugation of the Aztec people has endured as a landmark work of scholarship and dramatic storytelling. This pioneering study presents a compelling view of the clash of civilizations that reverberates in Latin America to this day.

Published when its author, Theodore Roosevelt, was only twenty-three years old, The Naval War of 1812 was immediately hailed as a literary and scholarly triumph, and it is still considered the definitive book on the subject. Roosevelt's inimitable style and robust narrative make The Naval War of 1812 enthralling, illuminating, and utterly essential to every armchair historian.