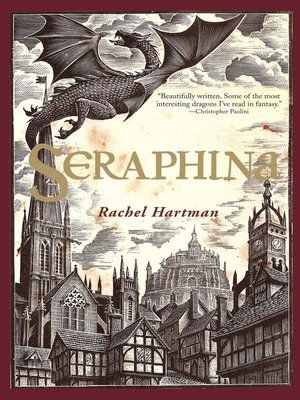 View more libraries...
A new vision of knights, dragons, and the fair maiden caught in between . . .

Four decades of peace have done little to ease the mistrust between humans and dragons in the kingdom of Goredd. Folding themselves into human shape, dragons attend court as ambassadors, and lend their rational, mathematical minds to universities as scholars and teachers. As the treaty's anniversary draws near, however, tensions are high.

Seraphina has reason to fear both sides. An unusually gifted musician, she joins the court just as a member of the royal family is murdered. While a sinister plot to destroy the peace is uncovered, Seraphina struggles to protect the secret behind her musical gift, one so terrible that its discovery could mean her very life. Seraphina's tortuous journey to self-acceptance will make a magical, indelible impression on its readers.