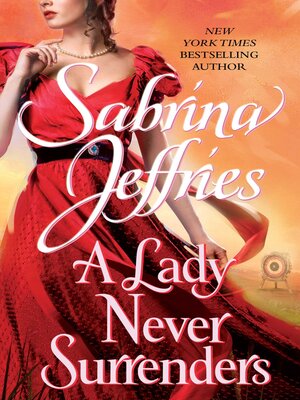 The Hellions of Halstead Hall

View more libraries...
New York Times bestselling author Sabrina Jeffries delights readers with the final novel in her sexy Regency Hellions of Hallstead Hall romance series, featuring Lady Celia Sharpe and the upstanding Bow Street runner, Pinter.
Lady Celia Sharpe has always been wary of marriage...but now her future depends on it.
With two months left to find a husband and fulfill her grandmother's ultimatum, Celia sets her sights on three eligible bachelors. Becoming betrothed to one of these wealthy, high-ranking men will surely prove her capable of getting married, so hopefully the wedding itself won't be necessary for Celia to receive her inheritance. Step two of her audacious plan is hiring the dark and dangerously compelling Bow Street Runner, Jackson Pinter, to investigate the three men she's chosen.
With Lady Celia bedeviling Jackson's days and nights, the last thing he wants is to help her find a husband. And when she recalls shadowed memories that lead his investigation into her parents' mysterious deaths in a new direction, putting her in danger, Jackson realizes the only man he wants Celia to marry is himself!

The Hellions of Halstead Hall