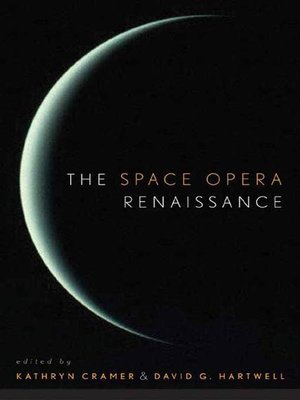 "Space opera", once a derisive term for cheap pulp adventure, has come to mean something more in modern SF: compelling adventure stories told against a broad canvas, and written to the highest level of skill. Indeed, it can be argued that the "new space opera" is one of the defining streams of modern SF.

Now, World Fantasy Award-winning anthologists David G. Hartwell and Kathryn Cramer have compiled a definitive overview of this subgenre, both as it was in the days of the pulp magazines, and as it has become in 2005. Included are major works from genre progenitors like Jack Williamson and Leigh Brackett, stylish midcentury voices like Cordwainer Smith and Samuel R. Delany, popular favorites like David Drake, Lois McMaster Bujold, and Ursula K. Le Guin, and modern-day pioneers such as Iain M. Banks, Steven Baxter, Scott Westerfeld, and Charles Stross.

Kathryn Cramer co-edited the World Fantasy Award-winning anthology The Architecture of Fear and was the editor of its widely-praised sequel Walls of Fear. She has edited and co-edited several other anthologies. She lives in Pleasantville, New York.

More about Kathryn Cramer
The Space Opera Renaissance
Copy and paste the code into your website.
New here? Learn how to read digital books for free