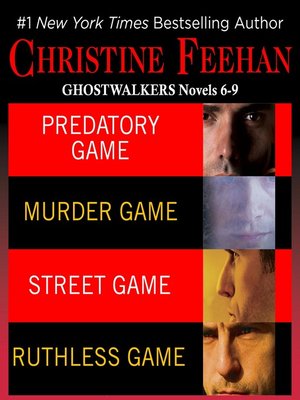 FictionRomanceSuspense
Surrender to the seductive world of the GhostWalkers in this collection that includes four novels from #1 New York Times bestselling author Christine Feehan.
PREDATORY GAME
Ghostwalker Jess Calhoun senses in Saber Winter a kindred spirit, a lost soul desperate for sanctuary. He offers her a home, a job, and a haven where she can safely reveal the secrets that shadow her. But danger follows her, too. Now, the riddles of both their pasts are about to collide, shattering the promise of their future with the ultimate betrayal.
MURDER GAME
Games should be fun, but for two expert teams across the country, they're murder. The participants in this violent challenge are rumored to be GhostWalkers—and Kaden Montague is determined to clear their name with the help of psychic Tansy Meadows. But as soon as he sees her, he knows his mission will be more complicated than he imagined—and the "murder game" may not be at all what it seems.
STREET GAME
For Mack McKinley and his team of GhostWalker killing machines, urban warfare is an art. But despite a hard-won knowledge of the San Francisco streets, Mack knows from experience that too many things can still go wrong. Danger was just another part of the game—and now he's come face-to-face with a woman who can play just as tough.
RUTHLESS GAME
Ghostwalker Kane Cannon is pure male—animalistic, sexual, protective, instinctive—and his past missions have prepared him for anything. But his newest assignment, to rescue hostages in Mexico, plunges him into a hot zone he never anticipated: the hiding place of Rose Patterson—fugitive, ex-lover, a fellow Ghostwalker pregnant with his child.
FictionRomanceSuspense

The Ghostwalker Novels 6-9
Copy and paste the code into your website.
New here? Learn how to read digital books for free