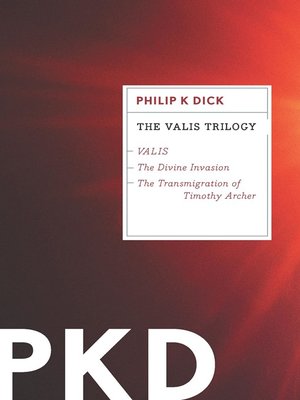 This e-book only edition brings together the three novels of Philip K. Dick's VALIS trilogy.

What is VALIS? This question is at the heart of Philip K. Dick's groundbreaking novel, the first book in his defining trilogy. When a beam of pink light begins giving a schizophrenic man named Horselover Fat (who just might also be known as Philip K. Dick) visions of an alternate Earth where the Roman Empire still reigns, he must decide whether he is crazy, or whether a godlike entity is showing him the true nature of the world.

God is not dead, he has merely been exiled to an extraterrestrial planet. And it is on this planet that God meets Herb Asher and convinces him to help retake Earth from the demonic Belial. As the middlie novel of Dick's VALIS trilogy, The Divine Invasion plays a pivotal role in answering the questions raised by the first novel, expanding that world while exploring just how much anyone can really know — even God himself.

The Transmigration of Timothy Archer

The final book in the VALIS trilogy, The Transmigration of Timothy Archer brings the author's search for the identity and nature of God to a close. The novel follows Bishop Timothy Archer as he travels to Israel, ostensibly to examine ancient scrolls bearing the words of Christ. But, more importantly, this leads him to examine the decisions he made during his life and how they may have contributed to the suicide of his mistress and son.

The VALIS Trilogy
Copy and paste the code into your website.
New here? Learn how to read digital books for free