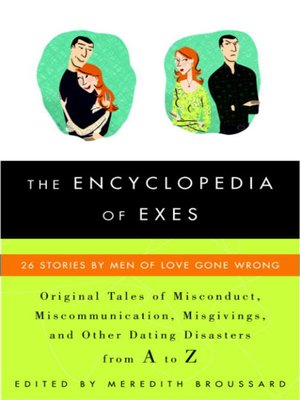 The Encyclopedia of Exes

FictionRomanceShort StoriesHumor (Fiction)
What does he really mean when he says: "It's not you, it's me"?
Profanity. Egging. Xanax. Oh, the things men (and even some women) will resort to when love's gone awry. In The Encyclopedia of Exes, some of today's hippest male writers dig deep into their romantic pasts to present twenty-six inspired pieces of short fiction on heartbreak and failed relationships. Their stories, ranging from the passionate to the cynical to the downright hilarious, address the age-old issue of how and why romance often fails—from a uniquely male perspective. Ever wondered just what men do with their broken hearts, or why they break women's hearts so often? The Encyclopedia of Exes demystifies the inner workings of the male psyche to the benefit of women everywhere, featuring a broad range of writers.
Anthony by Steve Almond • The Breakup Ceremony by Touré • Car by Matthew Sharpe • Devotion by Adam Langer • Egging by Jeff Johnson • Five by Jonathan Lethem • Geography by Michael Schur • Honesty by Ben Greenman • Innocence by Nick Fowler • John by Joshua Braff • Kiss by Anthony Schneider • Last by Richard Rushfield • Murmur by Panio Gianopoulos • Nightlife by Lee Klein • Over by Jack Murnighan • Profanity by Darin Strauss • Quitting by Dan Guterman • Radio by Sebastian Matthews • Sealed-off by Jonathan Ames • Triangle by Gary Shteyngart • Unambiguous by Ben Schrank • Virginity by Neal Pollack • Winston by Lewis Robinson • Xanax by Marc Spitz • Youth by Justin Haythe • Z by Dan Kennedy • and a Preface by John Aboud
An encyclopedic approach to our most enduring mystery, The Encyclopedia of Exes offers insight, humor, quality writing, and an unparalleled look inside the male mind.
FictionRomanceShort StoriesHumor (Fiction)

More about Meredith Broussard
The Encyclopedia of Exes
Copy and paste the code into your website.
New here? Learn how to read digital books for free