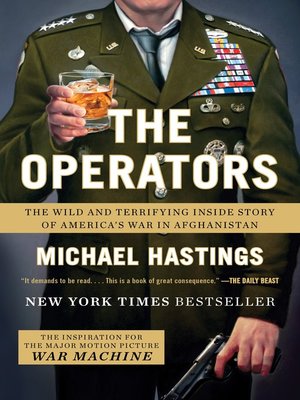 View more libraries...
The inspiration for the Netflix original movie War Machine, starring Brad Pitt, Tilda Swinton, and Ben Kingsley
From the author of The Last Magazine, a shocking behind-the-scenes portrait of our military commanders, their high-stake maneuvers, and the politcal firestorm that shook the United States.
In the shadow of the hunt for Bin Laden and the United States’ involvement in the Middle East, General Stanley McChrystal, the commanding general of international and U.S. forces in Afghanistan, was living large. His loyal staff liked to call him a “rock star.” During a spring 2010 trip, journalist Michael Hastings looked on as McChrystal and his staff let off steam, partying and openly bashing the Obama administration. When Hastings’s article appeared in Rolling Stone, it set off a political firestorm: McChrystal was unceremoniously fired.
In The Operators, Hastings picks up where his Rolling Stone coup ended. From patrol missions in the Afghan hinterlands to senior military advisors’ late-night bull sessions to hotel bars where spies and expensive hookers participate in nation-building, Hastings presents a shocking behind-the-scenes portrait of what he fears is an unwinnable war.  Written in prose that is at once eye-opening and other times uncannily conversational, readers of No Easy Day will take to Hastings’ unyielding first-hand account of the Afghan War and its cast of players.