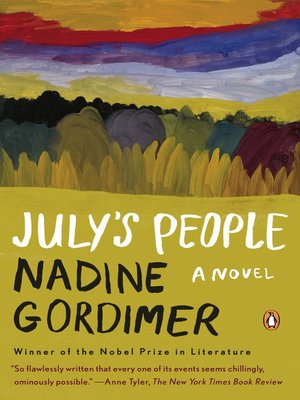 View more libraries...
“So flawlessly written that every one of its events seems chillingly, ominously possible.”—Anne Tyler, The New York Times Book Review
A startling, imaginative novel from the winner of the Nobel Prize in Literature
A violent war for equality has come to the white suburbs, driving out the ruling minority
For years, it had been what is called a “deteriorating situation.” Now all over South Africa the cities are battlegrounds. The members of the Smales family—liberal whites—are rescued from the terror by their servant, July, who leads them to refuge in his village. What happens to the Smaleses and to July—the shifts in character and relationships—gives us an unforgettable look into the terrifying, tacit understandings and misunderstandings between blacks and whites.