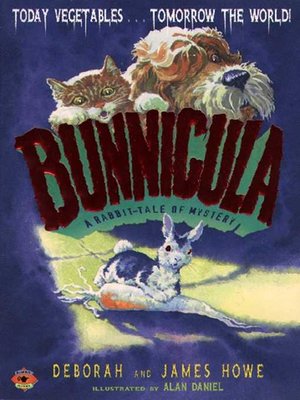 View more libraries...
This book is written by Harold. His fulltime occupation is dog. He lives with Mr. and Mrs. Monroe and their sons Toby and Pete. Also sharing the home are a cat named Chester and a rabbit named Bunnicula. It is because of Bunnicula that Harold turned to writing. Someone had to tell the full story of what happened in the Monroe household after the rabbit arrived.
Was Bunnicula really a vampire? Only Bunnicula knows for sure. But the story of Chester's suspicions and their consequences makes uproarious reading.
Since its first appearance in 1979, Bunnicula has been a hit with kids and their parents everywhere, selling over 8 million copies and winning numerous awards.