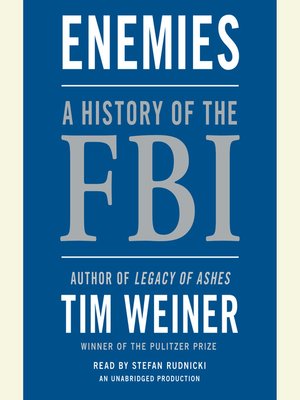 A History of the FBI

HistoryLawPoliticsNonfiction
"Turns the long history of the FBI into a story that is as compelling, and important, as today's headlines."—Jeffrey Toobin, author of American Heiress
NATIONAL BESTSELLER • Named One of the Best Books of the Year by The Washington Post, New York Daily News, and Slate
Enemies is the first definitive history of the FBI's secret intelligence operations, from an author whose work on the Pentagon and the CIA won him the Pulitzer Prize and the National Book Award.
We think of the FBI as America's police force. But secret intelligence is the Bureau's first and foremost mission. Enemies is the story of how presidents have used the FBI as the most formidable intelligence force in American history.
Here is the hidden history of America's hundred-year war on terror. The FBI has fought against terrorists, spies, anyone it deemed subversive—and sometimes American presidents. The FBI's secret intelligence and surveillance techniques have created a tug-of-war between protecting national security and infringing upon civil liberties. It is a tension that strains the very fabric of a free republic.
Praise for Enemies
"Pulitzer Prize–winning author Tim Weiner has written a riveting inside account of the FBI's secret machinations that goes so deep into the Bureau's skulduggery, readers will feel they are tapping the phones along with J. Edgar Hoover. This is a book that every American who cares about civil liberties should read."—Jane Mayer, author of Dark Money
"Outstanding."—The New York Times
"Absorbing . . . a sweeping narrative that is all the more entertaining because it is so redolent with screw-ups and scandals."—Los Angeles Times
"Fascinating."—The Wall Street Journal
"Important and disturbing . . . with all the verve and coherence of a good spy thriller."—The New York Times Book Review
"Exciting and fast-paced."—The Daily Beast
HistoryLawPoliticsNonfiction

Tim Weiner has won the Pulitzer Prize for his reporting and writing on secret intelligence and national security. As a correspondent for The New York Times, he covered the Central Intelligence Agency in Washington and terrorism in Afghanistan, Pak...

More about Tim Weiner
Enemies
Copy and paste the code into your website.
New here? Learn how to read digital books for free