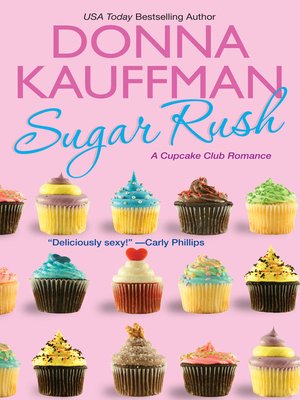 Luckily, the members of the Cupcake Club are about to taste it all. . .

When baker extraordinaire Leilani Trusdale left the bustle of New York City for Georgia's sleepy Sugarberry Island, she didn't expect her past to follow. Yet suddenly, her former boss, Baxter Dunne, aka Chef Hot Cakes, the man who taught her everything pastry, wants to film his hit cooking show in her tiny cupcakery. The same Chef Hot Cakes whose molten chocolate brown eyes and sexy British accent made Lani's mouth water and her cheeks blush the color of raspberry filling--stirring all kinds of kitchen gossip, much of which Lani wished was true. . .

Lani's friends are convinced that this time around, Baxter is the missing ingredient in her recipe for happiness. But convincing Lani will be a job for Baxter himself. And he'll need more than black velvet frosting to sweeten the deal. . .

STARRED REVIEW! Publishers Weekly PICK OF THE WEEK!
"Leilani Trusdale spends 10 years training with charming but tough chef Baxter "Hot Cakes” Dunne, taking over his New York City pastry shop when he leaves to host a cooking show. When she finally escapes the city to open a cupcake shop in her father’s tiny hometown of Sugarberry Island, Ga., Baxter turns up, natch, to start his show’s traveling season, with a secondary agenda of romancing Leilani. The tension leads Leilani to revive her old bake therapy sessions with her best friend, Charlotte, adding Leilani’s quiet new assistant and a lovable town gossip to lend support, share opinions, and add sugar as members of the Cupcake Club. The ladies of Sugarberry will be delightful companions to look forward to in future stories, and readers can bake along with the included cupcake recipes.” --Publishers Weekly

“The ladies of Sugarberry will be delightful companions to look forward to in future stories, and readers can bake along with the included cupcake recipes.” --Publishers Weekly

"The opening novel of Kauffman's Cupcake Club series is as sweet and adorable as its namesake treat." -- (Starred Review, Pick of the Week) Publisher's Weekly

"Sugar Rush is a playful, sensual, laugh-inducing read. But there's so much more to the story. Kauffman's book chronicles profound character growth and offers layer upon layer of authentic, life-changing conflict. . . . it's a good thing Sugar Rush is only the first in a series, because the residents of Sugarberry -- especially the delightfully oddball members of the Cupcake Club -- will lure you back to their island again and again." - -- Kathy Altman, USA Today/Happily Ever After

"Fans of cupcakes and TV chefs will like this first installment of the Cupcake Club back-to-back romance series that comes with recipes. For those looking for more, not to worry -- this isn't a light, spun-sugar tale. It has more substance, like a rich chocolate ganaches." -- 4 Stars, Joyce Morgan, RT Book Reviews

"It's like blending the Food Network together with CONFESSIONS OF A SHOPAHOLIC. . ."-- (4 Hearts!) Megan, Book Brat Reviews