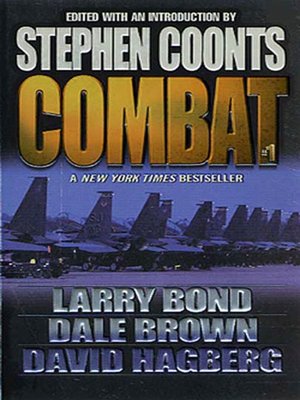 An historic landmark work, depicting war as it is and soon will be-the shape of war to come.

Larry Bond, who explores the wild frontier of space warfare, where American forces fight a tenacious enemy which threatens every free nation on Earth.

Dale Brown, taking us into the seldom-seen world of the military review board, and shows us how the future career of an EB-52 Megafortress pilot can depend on a man he's never met.

And David Hagberg, who brings us another Kirk McGarvey adventure, in which the C.I.A. director becomes entangled in the rising tensions between China and Taiwan. When a revolutionary leader is rescued from a Chinese prison, the Chinese government pushes the United States to the brink of war, and McGarvey has to make a choice with the fate of the world hanging in the balance.

Combat, Volume 1
Copy and paste the code into your website.
New here? Learn how to read digital books for free