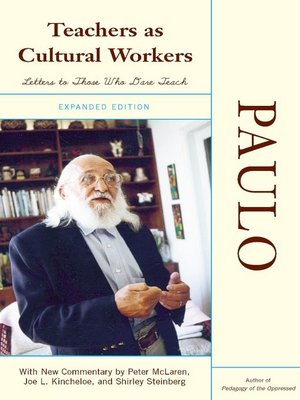 Letters to Those Who Dare Teach With New Commentary by Peter McLaren, Joe L. Kincheloe, and Shirley

EducationEssaysHistoryNonfiction
In Teachers as Cultural Workers, Freire speaks directly to teachers about the lessons learned from a lifetime of experience as an educator and social theorist. Freire’s words challenge all who teach to reflect critically on the meaning of the act of teaching as well as the meaning of learning. He shows why a teacher’s success depends on a permanent commitment to learning and training, as part of an ongoing appraisal of classroom practice. By opening themselves to recognition of the different roads students take in order to learn, teachers will become involved in a continual reconstruction of their own paths of curiosity, opening the doors to habits of learning that will benefit everyone in the classroom.In essays new to this edition, well-known and respected educators Peter McLaren, Joe Kincheloe, and Shirley Steinberg add their reflections on the relevance of Freire’s work to the study and practice of education across the globe.
EducationEssaysHistoryNonfiction

Paulo Freire (1921-1997) was a world-renowned Brazilian education scholar. Perhaps the most influential thinker about education in the late twentieth century, Freire has been particularly popular with informal educators with his emphasis on dialog...

More about Paulo Freire
Teachers As Cultural Workers
Copy and paste the code into your website.
New here? Learn how to read digital books for free