Myself and Some Other Being 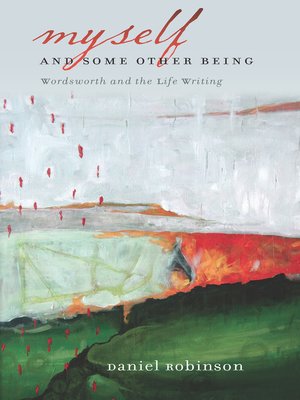 As a young writer with neither profession nor money, William Wordsworth committed himself to a career as a poet, embracing what he believed was his destiny. But even the "giant Wordsworth," as his friend and collaborator Samuel Taylor Coleridge called him, had his doubts. In Myself and Some Other Being, Daniel Robinson presents a young Wordsworth, as ambitious and insecure as any writer starting out, who was trying to prove to himself that he could become the great poet he desired to be and that Coleridge, equally brilliant and insecure, believed he already was.

Myself and Some Other Being is the story of Wordsworth becoming Wordsworth by writing the fragments and drafts of what would eventually become The Prelude, an autobiographical epic poem addressed to Coleridge that he hid from the public and was only published after his death in 1850. Feeling pressured to write the greatest epic poem of all time, a task set for him by Coleridge, Wordsworth feared that he was not up to the challenge and instead looked inside himself for memories and materials that he might make into poetry using the power of his imagination. What he found there was another Wordsworth—not exactly the memory of his younger self but rather "some other being" that he could adapt for an innovative kind of life-writing that he hoped would justify his writing life. By writing about himself and that other being, Wordsworth created an innovative autobiographical epic of becoming that is the masterpiece he believed he had failed to write.

In focusing on this young, ambitious, yet insecure Wordsworth struggling to find his place among other writers, Robinson ably demonstrates how The Prelude may serve as a provocative, instructive, and inspirational rumination on the writing of one's own life. Concentrating on the process of Wordsworth's endless revisions, the real literary business of creativity, Robinson puts Wordsworth forward as a model and inspiration for the next generation of writers.