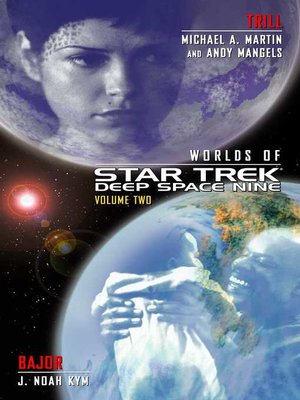 View more libraries...
Discover more about the Star Trek planets Trill and Bajor with these two sweeping and unputdownable stories starring Ezri Dax, Kira Nerys, and Benjamin Sisko of the space station Deep Space Nine.
They are a people with secrets in Trill. For centuries, they kept their true nature hidden, even taking disturbing steps to protect the small population of near-immortal symbionts with whom a privileged few Trill are joined, body, mind, and soul. They are a people who hold memory to be sacred, yet deny their own past. Now amid a whirlwind of scandal, accusations, and civil unrest, Ezri Dax must penetrate millennia of lies and deceptions, and rediscover what should never have been forgotten.

Meanwhile, in Bajor, the honeymoon is over. Following the euphoria of Bajor's entry into the Federation, the real business of making that union work has begun. But even on a world where politics and religion are intertwined, conflicting visions of Bajor's role in the interstellar arena divide the planet's leadership. As newly minted Captain Kira Nerys sets the tone for the kind of Starfleet officer she will be, First Minister Asarem makes a bold move to define Bajor's voice in the Federation, while the returned Benjamin Sisko prepares for a future that only he, as yet, can see.