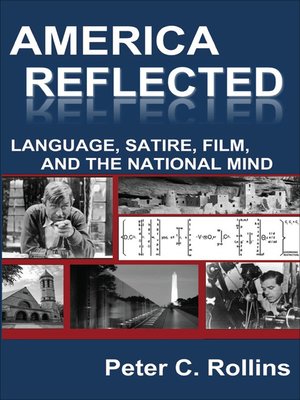 View more libraries...
Eclectic criticism and insightful observations from "one of the most respected cultural historians working today" (Ronald A. Wells, Professor of History Emeritus, Calvin College).
"From cowboy philosopher Will Rogers to popular perceptions of two world wars and Vietnam, from the history of language to the language of film and television, Peter Rollins has devoted his career to exploring the intriguing ways in which the creative impulse both shapes and reflects American culture. His observations are fresh, illuminating and of enduring value." —John E. O'Connor, co-founder/editor of Film & History: An Interdisciplinary Journal of Film and Television Studies
"Examines the roles of language, satire, and film in reflecting the American consciousness through such diverse sources as Orestes Brownson, Benjamin Lee Whorf, Will Rogers, and Hollywood. Readers of America Reflected are in for a delightful voyage as they travel through American history and culture with Peter Rollins as their guide providing personal and scholarly insights into the shaping of the American mind." —Ron Briley, editor of The Politics of Baseball: Essays on the Pastime and Power at Home and Abroad
"Even those who have known and admired Peter Rollins's acclaimed works will here find enlightening surprises. Epistemology, language theory, war's polemics, filmed history, and an array of significant creators of American culture are all elegantly displayed. This book will make you a wiser person and charm you while it does it." —John Shelton Lawrence, Emeritus Professor of Philosophy, Morningside College
"Two decades ago I was privileged to work on a book, America Observed, with Alistair Cooke. Now we have America Reflected by Peter Rollins . . . Not only does Rollins make good observations about our lives and times, his reflections on a diverse set of subjects helps us to see the meanings of our observations." —Ronald A. Wells, Professor of History Emeritus, Calvin College
"Rollins gathers together glimpses of our shared worlds, so that we may observe their interconnections across media, genres, and time. From down-home values and front-porch philosophy, to tales of wars and chronicles of lives, the subjects considered here are all part of the stories we tell about ourselves and our social worlds." —Cynthia J. Miller, President, Literature/Film Association