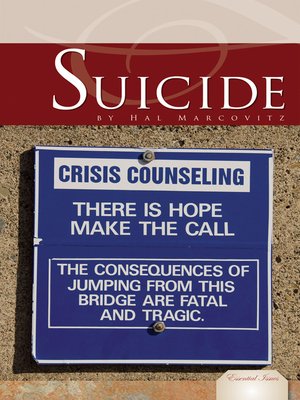 This title examines one of the world's critical issues, suicide. Readers will learn the historical background of the issue, leading up to its current and future impact on society. Discussed in detail are the causes of suicide, including mental disorders such as depression and bipolar disorder, and the effects of suicide on the victim's family, friends, and society as a whole. Also covered are suicide bombers, their mission, and their effect on society. Suicide-related legal acts, such as the Death with Dignity Act, are also covered. Engaging text, informative sidebars, and color photographs present information realistically, leaving readers with a thorough, honest interpretation of suicide. Features include a timeline, facts, additional resources, Web sites, a glossary, a bibliography, and an index.

Suicide
Copy and paste the code into your website.
New here? Learn how to read digital books for free