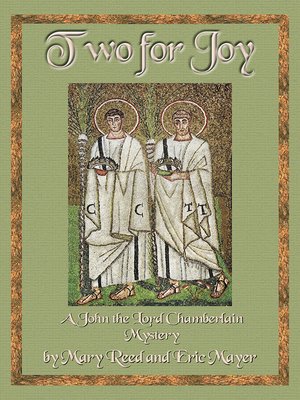 John the Eunuch, Lord Chamberlain to the Emperor Justinian, is skilled at keeping his footing on the treacherous slopes of court intrigue, but even he may slip when presented with a new and byzantine problem: why would a holy man high atop his pillar spontaneously combust during a thunder storm? Soon, other stylites burn to their deaths. John, still fresh from working a tricky murder case two years earlier in One for Sorrow, finds that his investigations are hampered by a pagan philosophy tutor from his youth and a heretical Christian prophet whose ultimatums threaten to topple the Empire.

Then murder strikes close to home and John has only days to find a solution before he, his friends, the Emperor Justinian, and the city itself are destroyed.

A colorful cast of characters that includes a runaway wife, servants and soldiers, madams and mendicants, a venomous court page and a wealthy landowner or two - not to mention John's bête noire, the Empress Theodora - add texture to this rich, exotic tale.

More about Eric Mayer
Two for Joy
Copy and paste the code into your website.
New here? Learn how to read digital books for free