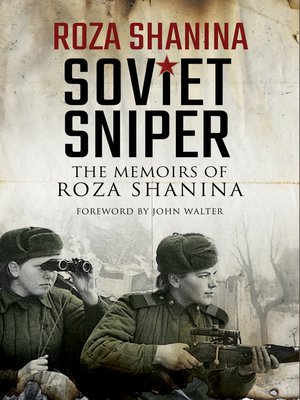 View more libraries...
The diary of the Soviet World War II sniper known as the "unseen terror of East Prussia" who killed 59 enemy soldiers before dying heroically at age 20.
Roza Shanina was celebrated for her remarkable shooting accuracy and astonishing bravery. Volunteering for military service after the death of her brother in 1941, she fought her way to the frontline and became a key player in a number of major battles. With 59 confirmed Nazi kills, she became the first servicewoman of the 3rd Belorussian Front to receive the Order of Glory.
Although it was strictly forbidden within the Soviet military to keep a combat diary, Shanina managed to maintain hers throughout the last 4 months of her life. In it, she describes the hardships, triumphs, mundanities and extremities of war, the relationships formed and the comrades lost. Translated into English for the first time, the diary is a rare insight into the complexities of what is was to be both a sniper and a woman on the frontline and stands as a testament to Shanina's humor, determination, extraordinary courage and indefatigable spirit.