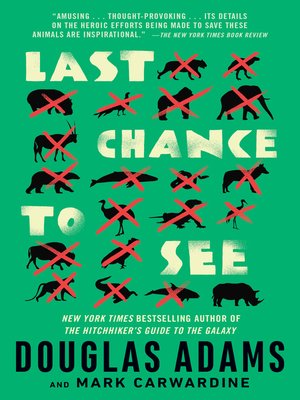 NatureNonfiction
New York Times bestselling author Douglas Adams and zoologist Mark Carwardine take off around the world in search of exotic, endangered creatures.
Join them as they encounter the animal kingdom in its stunning beauty, astonishing variety, and imminent peril: the giant Komodo dragon of Indonesia, the helpless but loveable Kakapo of New Zealand, the blind river dolphins of China, the white rhinos of Zaire, the rare birds of Mauritius island in the Indian Ocean. Hilarious and poignant—as only Douglas Adams can be—Last Chance to See is an entertaining and arresting odyssey through the Earth's magnificent wildlife galaxy.

Praise for Last Chance to See

"Lively, sharply satirical, brilliantly written . . . shows how human care can undo what human carelessness has wrought."—The Atlantic
"These authors don't hesitate to present the alarming facts: More than 1,000 species of animals (and plants) become extinct every year. . . . Perhaps Adams and Carwardine, with their witty science, will help prevent such misadventures in the future."—Boston Sunday Herald

"Very funny and moving . . . The glimpses of rare fauna seem to have enlarged [Adams's] thinking, enlivened his world; and so might the animals do for us all, if we were to help them live."—The Washington Post Book World

"[Adams] invites us to enter into a conspiracy of laughter and caring."—Los Angeles Times

"Amusing . . . thought-provoking . . . Its details on the heroic efforts being made to save these animals are inspirational."—The New York Times Book Review
NatureNonfiction

More about Douglas Adams
Last Chance to See
Copy and paste the code into your website.
New here? Learn how to read digital books for free