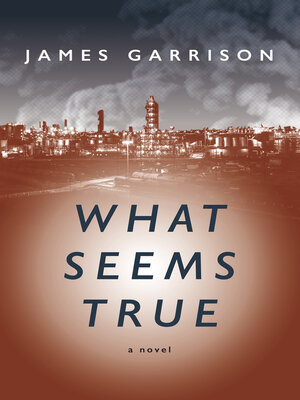 In 1980, the first black supervisor at a Texas Gulf Coast refinery turns up dead behind an abandoned drive-in theater. When a Texas Ranger comes to investigate, the refinery's attorney, Dan Esperson, is drawn into the investigation—and into a tangled web of racial conflict, sex, and deception. Two refinery employees are arrested for the murder. One confesses that the other did it but will never testify. When the killer is released from jail for lack of evidence, Dan may be next on his list.

What Seems True was inspired by a true crime on the Texas Gulf Coast in 1979.

"Smart and sensual, atmospheric, you can feel the humidity of the Texas Gulf Coast, smell the smoke-filled boardrooms and musty motels, the exhaust belching forth from the refinery that lights up the night sky like a fairyland in James Garrison's latest novel, What Seems True ... a savvy tale full of grit and grime and passion, vivid characters, and a male narrator who will appeal to both men and women. You will find yourself rooting for Attorney Dan Esperson, even when you are cringing at some of his choices ... I highly recommend it."
—KATHLEEN M. RODGERS, WINNER OF THE 2020 MWSA FOUNDER'S AWARD AND AUTHOR OF THE FLYING CUTTERBUCKS