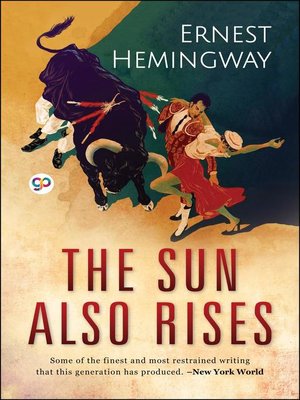 Originally published in 1926, The Sun Also Rises is Ernest Hemingway's first novel and a classic example of his spare but powerful writing style. A poignant look at the disillusionment and angst of the post-World War I generation, the novel introduces two of Hemingway's most unforgettable characters: Jake Barnes and Lady Brett Ashley. Based on Hemingway's experiences, 'The Sun Also Rises' is the story of a group of American and English expatriates living in Paris who take an excursion to Pamplona, Spain. The novel has forever associated Hemingway with bullfights and the running of the bulls.

This powerful work of modern fiction, filled with memorable characters and universal themes, is summarized in this volume, which is enhanced by thought-provoking critical extracts, focused biographical details, and an annotated bibliography. This book helped to establish Hemingway as one of the greatest writers of the twentieth century.