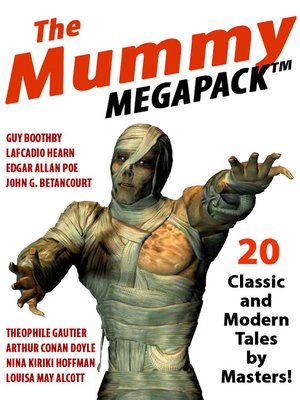 Hours of great reading await, with tales from some of the 19th and 20th century's most renowned horror and dark fantasy authors! Explore the uncanny world of mummies, ancient egypt, and dark sorcery, with these 20 stories:

SOME WORDS WITH A MUMMY, by Edgar Allan Poe

THE POWER OF WAKING, by Nina Kiriki Hoffman

LOST IN A PYRAMID, OR THE MUMMY'S CURSE, by Louisa May Alcott

THE RING OF THOTH, by Sir Arthur Conan Doyle

THE ROMANCE OF A MUMMY, by Théophile Gautier

THE BOOK OF THOTH, by Lafcadio Hearn

THE MUMMY'S FOOT, by Théophile Gautier

THE STORY OF BAELBROW, by E. and H. Heron

A PROFESSOR OF EGYPTOLOGY, by Guy Boothby

MY NEW YEAR'S EVE AMONG THE MUMMIES, by Grant Allen

WHATEVER WAS FORGOTTEN, by Nina Kiriki Hoffman

THE PERFUME OF EGYPT, by C. W. Leadbeater