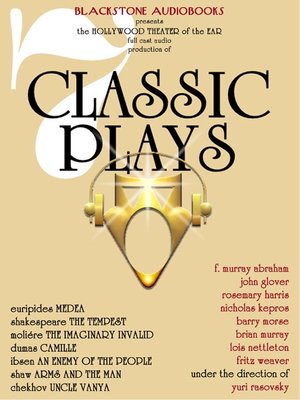 Blackstone Audio is proud to present seven great plays in a collection that illustrates the development of European drama from ancient times to the threshold of the modern theater: Medea by Euripides, The Tempest by Shakespeare, The Imaginary Invalid, by Molière, Camille by Dumas, An Enemy of the People by Ibsen, Arms and the Man by Shaw, and Uncle Vanya by Chekhov.

A superb repertory company with distinguished guest artists has been assembled here, under the direction of veteran producer Yuri Rasovsky, who has won both an Audie Award for book production and the George Foster Peabody Award for broadcasting. These full performances use all the resources of audio to full advantage while keeping the substance of the works intact, resulting in both greater intimacy and lively theatrics.

John Glover, most famous for his roles as villainous characters on television and in films, has performed many times on stage, winning a Tony Award for his role in Love! Valour! Compassion! He also appeared in the film version.

Alexandre Dumas fils (1824–1895), was the illegitimate son of Alexandre Dumas, père, who followed in his father's footsteps becoming a celebrated author and playwright. In 1831 his father legally recognized him and ensured the young Dumas received...

Anton Chekhov (1860–1904) was the author of hundreds of short stories and several plays and is regarded by many as both the greatest Russian storyteller and the father of modern drama.

Yuri Rasovsky (1944–2012) was the leading writer, producer, and director of audio drama in the United States. Also a distinguished actor, narrator, and critic, his numerous honors include two Peabody Awards, eight Audie Awards, and a Grammy.

Seven Classic Plays
Copy and paste the code into your website.
New here? Learn how to read digital books for free