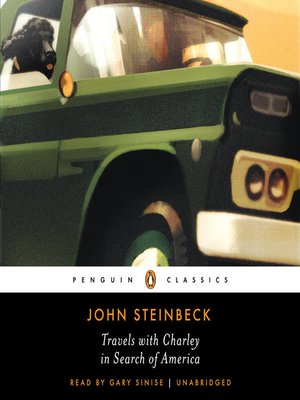 In Search of America

Biography & AutobiographyHistoryTravelNonfiction
An intimate journey across America, as told by one of its most beloved writers

To hear the speech of the real America, to smell the grass and the trees, to see the colors and the light—these were John Steinbeck's goals as he set out, at the age of fifty-eight, to rediscover the country he had been writing about for so many years.
With Charley, his French poodle, Steinbeck drives the interstates and the country roads, dines with truckers, encounters bears at Yellowstone and old friends in San Francisco. Along the way he reflects on the American character, racial hostility, the particular form of American loneliness he finds almost everywhere, and the unexpected kindness of strangers.
Biography & AutobiographyHistoryTravelNonfiction

John Steinbeck, born in Salinas, California, in 1902, grew up in a fertile agricultural valley, about 25 miles from the Pacific Coast. Both the valley and the coast would serve as settings for some of his best fiction. In 1919 he went to Stanford ...

More about John Steinbeck
Travels with Charley
Copy and paste the code into your website.
New here? Learn how to read digital books for free