1962: Baseball and America in the Time of JFK 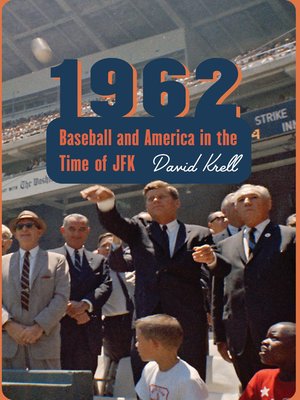 In the watershed year of 1962, events and people came together to reshape baseball like never before. The season saw five no-hitters, a rare National League playoff between the Giants and the Dodgers, and a thrilling seven-game World Series where the Yankees, led by Mickey Mantle, won their twentieth title, beating the San Francisco Giants, led by Willie Mays, in their first appearance since leaving New York.
Baseball was expanding with the Houston Colt .45s and the New York Mets, who tried to fill the National League void in New York but finished with 120 losses and the worst winning percentage since 1900. Despite their record, the '62 Mets revived National League baseball in a city thirsty for an alternative to the Yankees. As the team struggled through a disastrous first year, manager Casey Stengel famously asked, "Can't anybody here play this game?"
Earlier that year in Los Angeles, Dodgers owner Walter O'Malley launched Dodger Stadium, a state-of-the-art ballpark in Chavez Ravine and a new icon for the city. For the Dodgers, Sandy Koufax pitched his first of four career no-hitters, Maury Wills set a record for stolen bases in a season, and Don Drysdale won twenty-five games.
Beyond baseball, 1962 was also a momentous year in American history: Mary Early became the first Black graduate of the University of Georgia, First Lady Jackie Kennedy revealed the secrets of the White House in a television special, John Glenn became the first astronaut to orbit Earth, and JFK stared down Russia during the Cuban Missile Crisis. Weaving the 1962 baseball season within the social fabric of this era, David Krell delivers a fascinating book as epochal as its subject.