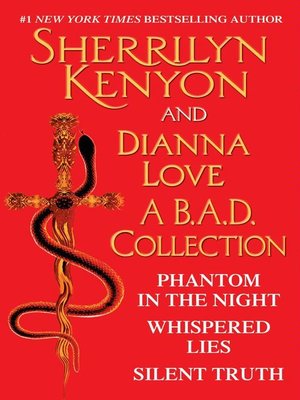 Phantom in the Night, Whispered Lies, Silent Truth and an excerpt from Alterant · B. A. D. Agency

FictionRomanceSuspense
This eBook anthology contains three books in Sherrilyn Kenyon's bestselling "B.A.D." series.
Phantom in the Night
After losing her mother to a vigilante killer, Terri Mitchell has dedicated her life to justice. Working covertly as a new agent for the Bureau of American Defense agency, she's consulting with the New Orleans Police Department to bust an organized crime ring suspected of funding terrorism. But when rumors surface of a phantom ghost terrorizing and killing the very people she's investigating, she's suspicious.
Nathan Drake has spent his life protecting his family, the only thing that matters to him...until the most feared drug lord in the southeast takes everything Nathan holds dear. Now he's a man on a mission with nothing to lose. He figures he only needs to stay alive long enough to protect the innocent lives the killers are out to destroy.
As the two of them seek a similar goal by different means, Terri and Nathan are drawn deep into an evil underbelly that cuts through all levels of society. Now two people who have no reason to trust must trust in each other or die. And if they die, a deadly attack will be unleashed on thousands of innocent people.

Gabrielle Saxe has hidden from a killer for the past decade, sending anonymous tips on international criminals to intelligence agencies around the world. When a postcard arrives from a friend who is supposed to be dead, she takes a risk that catapults her into the midst of dangerous operatives on a treacherous mission—and into the arms of Bureau of American Defense operative Carlos Delgado. Dutybound to surrender her to Interpol as an international felon, Carlos is the last person Gabrielle should trust and the only one standing between her and death. But little does she know, she holds the key to his survival as well. . . .

Silent Truth
In the sizzling new adventure from New York Times bestselling authors Sherrilyn Kenyon and Dianna Love, a red-hot BAD boy teams up with a sexy television reporter on an explosive quest for revenge.

Tough-as-nails Bureau of American Defense agent Hunter Thornton-Payne is no stranger to uncomfortable top-secret missions, but tonight takes the cake. He just needs to stick out a stuffy charity fund-raiser long enough to find the ruthless assassin he's hunted for four years. It's a rogue operation, but Hunter's got nothing to lose—until a beautiful brunette unexpectedly pulls him into her own dangerous agenda. Abbie Blanton will do anything to cure her mother's mysterious illness. When a high-profile heiress is murdered as Abbie tries to blackmail her for clues, Abbie realizes she's stumbled into an unforgiving conspiracy—and she's the next target. Soon, she and Hunter discover an alarming connection and begin a treacherous battle against an evil enterprise that someone will go to terrifying lengths to keep hidden.
FictionRomanceSuspense

Dianna Love is the New York Times bestselling coauthor of nine novels. She is a national speaker who started writing while working over a hundred feet in the air, creating marketing projects for Fortune 500 companies. When not plotting out her lat...

Sherrilyn Kenyon is the #1 New York Times bestselling author of several series, including the Bureau of American Defense novels BAD Attitude, Phantom in the Night, Whispered Lies, and Silent Truth and the Belador series that includes Blood Trinity...

More about Sherrilyn Kenyon
A B. A. D. Collection
Copy and paste the code into your website.
New here? Learn how to read digital books for free