ebook ∣ THE POWER AND THE DARKNESS 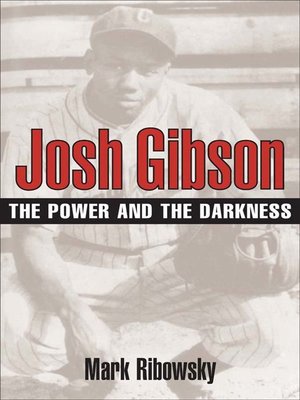 It is said that Josh Gibson is the only man ever to have hit a fair ball out of Yankee Stadium. Some claim he hit as many as seventy-five home runs in a season. All agreed he was a frightening hitter to face. What Satchel Paige was to pitching in the Negro leagues, Gibson was to hitting: their greatest star, biggest gate attraction, and most important symbol.

Though Gibson is best remembered as "the black Babe Ruth," Ruth became a beloved symbol of the national pastime, while Gibson lived a life veiled in the darkness that came both from the shadow world of the Negro leagues and from within his own tortured soul.

Mark Ribowsky, the widely acclaimed biographer of Satchel Paige, pulls no punches in his portrait of this magnificent, troubled athlete. This is the most complete, thorough, and authoritative account of the life of black ball's greatest hitter, and one of its most important stars.|

Mark Ribowsky is the author of several highly regarded books, including Don't Look Back, on Satchel Paige, and A Complete History of the Negro Leagues, 1884-1955.