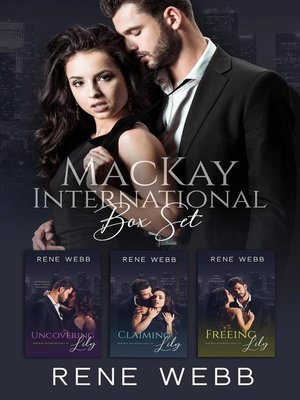 This box set is the completed MacKay International trilogy, plus several fun exclusives including a deleted scene and character directory!

✓ Stranded in a brothel (what can they do to pass the time?)

Will one night be enough to win her trust, to save her?

While studying abroad, I was drugged, kidnapped, and imprisoned . . . in a Hong Kong brothel. After several failed attempts to escape, I know my time is running out. My innocence is about to be sold to the highest bidder.

My plan was to meet an investor at the upscale brothel and immediately return to Boston. That was until I uncovered Lily. I recognized her instantly, but she had no memory of me.

Now I only have one night to claim her and rescue her from her captors.

He rescued her, but will she let him claim her?

I may have been rescued from the brothel, but my safety is still in question. My captors are on the hunt and closing in. Finn and I must team up to unravel the truth behind my kidnapping and take down those responsible.

Despite the danger and trauma, I have found safety with Finn. After one night together, he wants to claim me as his own. Am I willing to let him own me completely?

Can Finn convince me that I want to be his, before my family interferes?

He rescued her, but only she can reclaim her life...

My entire world changed the night I was kidnapped.

Finn may have rescued me.

But only I can claim my future.

I have no intention of letting Lily go.

I will use everything I have in my arsenal to keep her.