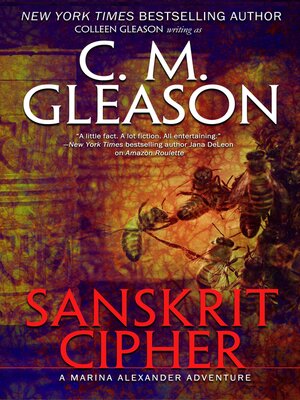 Marina Alexander is back in her third adventure of international intrigue, ancient secrets, and high-stakes adventure!

NEPAL, 2000 years ago: A honey hunting tribe collects its seasonal bounty, leaving an offering in a sacred cave.

PARIS, 1897: The Jewish-Russian author of a controversial book about Jesus is threatened into silence by a trio of Buddhist monks.

MIDWESTERN UNITED STATES: Three strange truck accidents in three different states spill hazardous materials all over the ground...and the only explanation is a strange bacteria from a glacier melt originating in Siberia.

Marina Alexander—small plane pilot, search and rescuer, and professor of ancient writings—has tried to put her familial connection to a dangerous eco-terrorist group behind her. So when insect expert Eli Sanchez discovers a unique honeybee packaged with ancient Sanskrit writings and asks Marina for her help, she jumps at the opportunity.

It's not long before Marina and Eli realize someone is willing to kill to keep the origins of a humble honeybee secret.... At the same time, it becomes horrifyingly clear that the eco-terrorists led by Marina's father will do anything to draw attention to their cause.

In order to stop them, Marina has no choice but to team up with her father's group—something she swore she would never do.

And when the truth begins to come out, the answer is the last thing she ever expected...

From the ancient honey hunting traditions of Nepal to glitzy, gritty Belle-Époque Paris, the inner workings of the Vatican, and the dry, rugged mountains of India, SANSKRIT CIPHER takes readers on a wild ride as Marina and her friends work against the clock to protect one of the greatest secrets of all time—a secret that, if exposed, would rattle the world to its core.