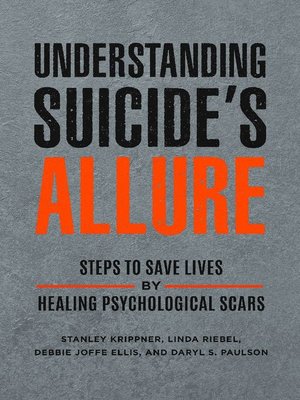 This book explains why suicide can be alluring to a person aiming to stop his or her traumatic pain—whether its source is bullying, sexual assault, war combat, or other PTSD-invoking events—and details approaches that can prevent suicide.

Suicide has been a taboo topic in Western culture. The mere mention of suicide sparks reactive responses that include medical, moral, spiritual, and religious debates. As a result, the authors open an important discussion here, offering an honest and non-judgmental examination of the many aspects involved in the nature of suicide, explaining that above all, people need to learn how to support those struggling with suicidal thoughts or to intercept their own suicidal thinking. The book also includes an extensive review and evaluation of the many available mental health treatments.

Special consideration is given to military suicides. U.S. soldier suicides exceed one per day and continue to rise in all military branches, while veteran suicide rates are even higher, averaging 17 per day. Communities, families, veterans, and service members are in need of tools and insights for coping with, navigating, and exposing the suicidal attitudes affecting many current and former members of the military.