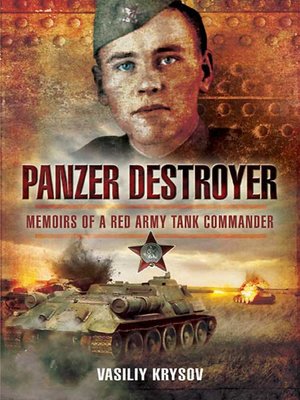 The day after Vasiliy Krysov finished school, on 22 June 1941, Germany attacked the Soviet Union and provoked a war of unparalleled extent and cruelty. For the next three years, as a tank commander, Krysov fought against the German panzers in some of the most intense and destructive armored engagements in history–including those at Stalingrad, Kursk and Königsberg.

This is the remarkable story of his war. As the commander of a heavy tank, a self-propelled gun -a tank destroyer-and a T-34, he fought his way westward across Russia, the Ukraine and Poland against a skillful and determined enemy which had previously never known defeat. Krysov repeatedly faced tough SS panzer divisions, like the SS Leibstandarte Adolf Hitler Panzer Division in the Bruilov-Fastov area in 1943, and the SS Das Wiking Panzer Division in Poland in 1944. . Krysov was at Kursk and participated in a counterattack at Ponyri. The ruthlessness of this long and bitter campaign is vividly depicted in his narrative, as is the enormous scale and complexity of the fighting.

Honestly, and with an extraordinary clarity of recall, he describes confrontations with German Tiger and Panther tanks and deadly anti-tank guns. He was wounded four times, his crewmen and his commanding officers were killed, but he was fated to survive and record his experience of combat. His memoirs give a compelling insight into the reality of tank warfare on the Eastern Front.

Vasiliy Krysov took part in, and survived, some of the great tank battles of WW2, including Stalingrad and Kursk. His war started as a Lieutenant commanding a KV-1S main battle tank, followed by command of various self-propelled guns, and ended up...

More about Vasiliy Krysov
Panzer Destroyer
Copy and paste the code into your website.
New here? Learn how to read digital books for free