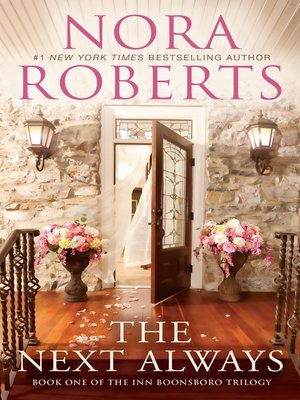 FictionRomance
"America's favorite writer" (The New Yorker) begins a trilogy inspired by the inn she owns and the town she loves.
The historic hotel in BoonsBoro, Maryland, has endured war and peace, changing hands, even rumored hauntings. Now it's getting a major facelift from the Montgomery brothers and their eccentric mother. As the architect of the family, Beckett has little time for a social life. But there's another project he's got his eye on: the girl he's been waiting to kiss since he was sixteen.
After losing her husband and returning to her hometown, Clare Brewster soon settles into her life as the mother of three young sons while running the town's bookstore. Though busy, Clare is drawn across the street by Beckett's transformation of the old inn, wanting to take a closer look...at both the building and the man behind it...

From the Trade Paperback edition.
FictionRomance

The Next Always
Copy and paste the code into your website.
New here? Learn how to read digital books for free