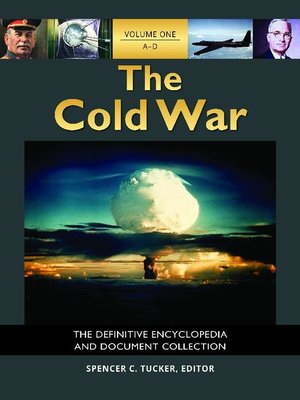 This sweeping reference work covers every aspect of the Cold War, from its ignition in the ashes of World War II, through the Berlin Wall and the Cuban Missile Crisis, to the collapse of the Soviet Union in 1991.

The Cold War superpower face-off between the Soviet Union and the United States dominated international affairs in the second half of the 20th century and still reverberates around the world today. This comprehensive and insightful multivolume set provides authoritative entries on all aspects of this world-changing event, including wars, new military technologies, diplomatic initiatives, espionage activities, important individuals and organizations, economic developments, societal and cultural events, and more. This expansive coverage provides readers with the necessary context to understand the many facets of this complex conflict.

The work begins with a preface and introduction and then offers illuminating introductory essays on the origins and course of the Cold War, which are followed by some 1,500 entries on key individuals, wars, battles, weapons systems, diplomacy, politics, economics, and art and culture. Each entry has cross-references and a list of books for further reading. The text includes more than 100 key primary source documents, a detailed chronology, a glossary, and a selective bibliography. Numerous illustrations and maps are inset throughout to provide additional context to the material.