This Book Betrays My Brother 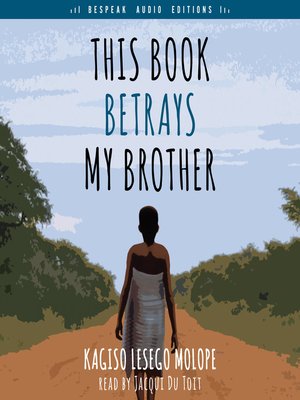 Named to Best Books for Kids and Teens, Fall 2018

Named to Chicago Public Library's Best of the Best Books, 2018

What does a teenage girl do when she sees her beloved older brother commit a horrific crime? Should she report to her parents, or should she keep quiet? Should she confront him? All her life, Naledi has been in awe of Basi, her charming and outgoing older brother. They've shared their childhood, with its jokes and secrets, the alliances and stories about the community. Having reached thirteen, she is preparing to go to the school dance. Then she sees Basi commit an act that violates everything she believes about him. How will she live her life now?

This coming-of-age novel brings together many social issues, peculiar not only to South Africa but elsewhere as well, in the modern world: class and race, young love and physical desire, homosexuality. In beautiful, lyrical, and intimate prose, Molope shows the dilemmas facing a young woman as she attempts to find her place in a new, multiracial, and dynamic nation emerging into the world after more than a century of racist colonialism. A world now dominated by men.

Bespeak Audio Editions brings Canadian voices to the world with audiobook editions of some of the country's greatest works of literature, performed by Canadian actors.