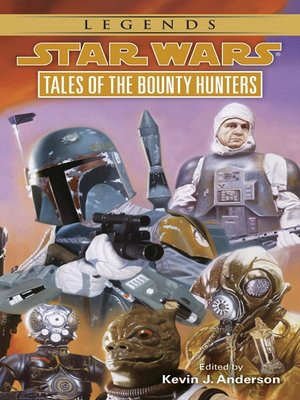 Tales of the Bounty Hunters

In a wild and battle-scarred galaxy, assassins, pirates, smugglers, and cutthroats of every description roam at will, fearing only the professional bounty hunters-amoral adventurers who track down the scum of the universe...for a fee. When Darth Vader seeks to strike at the heart of the Rebellion by targeting Han Solo and the Millennium Falcon, he calls upon six of the most successful-and feared-hunters, including the merciless Boba Fett. They all have two things in common: lust for profit and contempt for life... Featuring original stories by Kevin J. Anderson, M. Shayne Bell, Daniel Keys Moran, Kathy Tyers and Dave Wolverton.

Kevin J. Anderson has written many bestsellers and has been nominated for the Nebula Award, the Bram Stoker Award, and the SFX Reader's Choice Award. He also holds the Guinness World Record for largest single-author signing.

More about Kevin Anderson
Tales of the Bounty Hunters
Copy and paste the code into your website.
New here? Learn how to read digital books for free