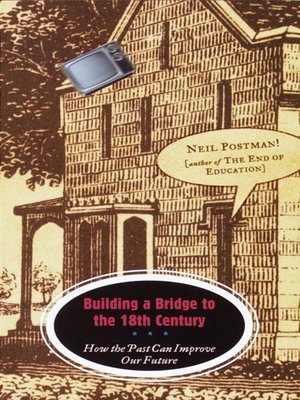 Building a Bridge to the 18th Century

How the Past Can Improve Our Future

HistorySociologyNonfiction
At a time when we are reexamining our values, reeling from the pace of change, witnessing the clash between good instincts and "pragmatism," dealing with the angst of a new millennium, Neil Postman, one of our most distinguished observers of contemporary society, provides for us a source of guidance and inspiration. In Building a Bridge to the Eighteenth Century he revisits the Enlightenment, that great flowering of ideas that provided a humane direction for the future — ideas that formed our nation and that we would do well to embrace anew.
He turns our attention to Goethe, Voltaire, Rousseau, Diderot, Kant, Edward Gibbon, Adam Smith, Thomas Paine, Jefferson, and Franklin, and to their then-radical thinking about inductive science, religious and political freedom, popular education, rational commerce, the nation-state, progress, and happiness.
Postman calls for a future connected to traditions that provide sane authority and meaningful purpose — as opposed to an overreliance on technology and an increasing disregard for the lessons of history. And he argues passionately for specific new guidelines in the education of our children, with renewed emphasis on developing the intellect as successfully as we are developing a computer-driven world.
Witty, provocative, and brilliantly reasoned, Building a Bridge to the Eighteenth Century is Neil Postman's most radical, and most commonsensical, book yet.
HistorySociologyNonfiction

More about Neil Postman
Building a Bridge to the 18th Century
Copy and paste the code into your website.
New here? Learn how to read digital books for free