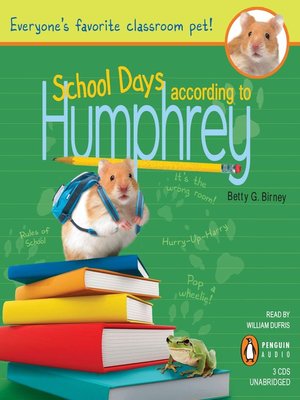 School Days According to Humphrey

Juvenile FictionHumor (Fiction)
A new school year and new friends for everyone's favorite classroom pet!
Humphrey is excited to get back to Room 26 and see all his old classmates. But on the first day of school, a bunch of strange kids arrive and no matter how loudly he squeaks up, they don't realize they're in the wrong room! Finally Humphrey realizes that these kids are his new classmates, and he sets off to learn all about them.
He hasn't forgotten about his friends from last year, and of course they miss him a ton. But when they start talking about taking him from Mrs. Brisbane's room, Humphrey gets unsqueakably nervous. How could he say good-bye to Mrs. Brisbane and Og—not to mention his new friends—for good?
From the Trade Paperback edition.
Juvenile FictionHumor (Fiction)

More about Betty G. Birney
School Days According to Humphrey
Copy and paste the code into your website.
New here? Learn how to read digital books for free