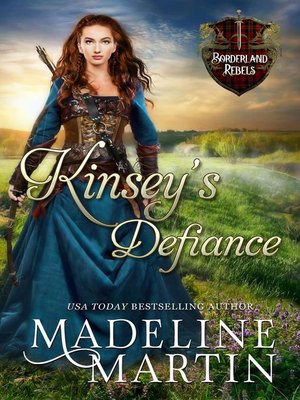 CAN A BORN PROTECTOR

Feisty by nature, Kinsey Fletcher has always stood up for those who can't defend themselves. Joining a group of Scottish rebels fighting to reclaim stolen land is a natural fit for her, as she knows what it's like to have everything taken by the English. Though resistant to love, she finds herself drawn to the leader of the group, who might be too charming for his own good. And yet, no matter how she tries to ignore it, he ignites in her an unexpected desire that cannot be denied.

AND A BORN CHARMER

A roguish flirt, William MacLeod is the only son of Laird MacLeod—but his father has deigned that unless William proves himself a leader, he will not be named heir. To prove his worth, William goes on a campaign with the newly returned King of Scotland. When he meets the lovely Kinsey and learns she's an archer, he convinces her to join his cause. He thinks that she will be his for the taking, but soon learns it will take more than charm to win her heart.

Together, they will have to survive in a country torn apart by war and rife with danger. With tremendous odds against them, can a love blossom and make them stronger together, or will their conflicting goals tear them apart?