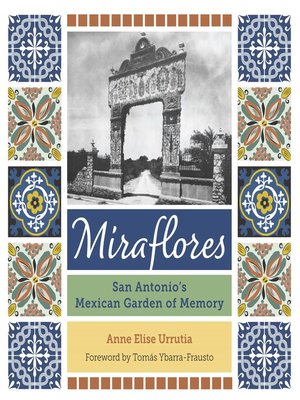 Aureliano Urrutia, a prominent physician and public servant in Mexico City, built Miraflores garden after he immigrated to San Antonio, Texas, from Mexico in 1914 during the Mexican Revolution. A man of science, Urrutia professed the importance of nature, art, literature, history, music, and community.

Everything in Miraflores, located near the headwaters of the San Antonio River—the plants, architecture, sculpture, and artisanship—formed an atmospheric landscape reflecting Urrutia's love for and memory of his homeland. Sculptures and fountains created by Luis L. Sanchez, Ignacio Asúnsolo, and Dionicio Rodríguez, and other Mexican artists and artisans evoked the ideals of Mexican culture, all surrounded by Talavera tile and plant species native to Mexico.

The wear of time saw many of the garden's features, artworks, and landscape elements decayed, lost, or significantly altered. Despite being one of the country's unique cultural landscapes, situated at the edge of historic Brackenridge Park, the garden became barely recognizable.

In Miraflores, Anne Elise Urrutia, the great-granddaughter of Urrutia, recounts the garden's history, drawing on family archives and other primary sources to reconstruct this remarkable story.

Miraflores celebrates the importance of green spaces in urban areas and the vitality of a place's cultural, historical, and artistic meanings. Urrutia's garden was a magical gift to Texas and an international tribute to his Mexican homeland.

|Aureliano Urrutia, a prominent physician in Mexico City, built Miraflores garden after immigrating to Texas during the Mexican Revolution. A man of science, he valued nature, art, literature, history, and community. The garden, whose name roughly translates to "behold the flowers," was built primarily from 1921 to 1945. Its plants, architecture, sculpture, and artisanship formed a cultural landscape reflecting Urrutia's love for and memory of his homeland. Though recent decades have rendered much of the garden decayed and barely recognizable, it is now part of San Antonio's historic Brackenridge Park. Miraflores: San Antonio's Mexican Garden of Memory recounts the garden's history and celebrates the importance of the cultural, historical, and artistic meaning of a place.