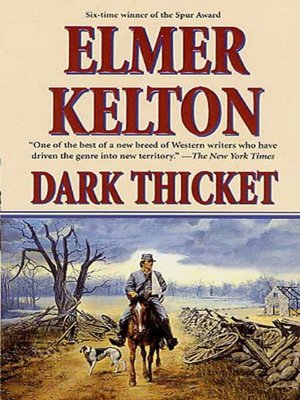 FictionWestern
One of America's greatest Western storytellers, Elmer Kelton has been voted the greatest Western writers of all time by the Western Writers of America. Dark Thicket is one of his many classic tales of the history of his home state of Texas.

Young Owen Danforth rides home to Texas as a wounded Confederate soldier, at a time when his home state is as savagely divided as his nation. As a grievously wounded America staggers toward the inevitable end of the Civil War, secessionist "home guards" and staunch Union loyalists fight their own bloody battles on a more local scale. For Owen, sick to death of fighting and yearning for peace and recuperation, his homecoming is bittersweet. And when his blood ties force him to choose a side in an unwinnable conflict, Owen begins to wonder if he will ever see peace in Texas again.
FictionWestern

More about Elmer Kelton
Dark Thicket
Copy and paste the code into your website.
New here? Learn how to read digital books for free