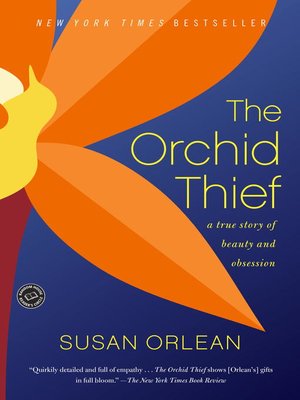 A True Story of Beauty and Obsession

A modern classic of personal journalism, The Orchid Thief is Susan Orlean's wickedly funny, elegant, and captivating tale of an amazing obsession. Determined to clone an endangered flower—the rare ghost orchid Polyrrhiza lindenii—a deeply eccentric and oddly attractive man named John Laroche leads Orlean on an unforgettable tour of America's strange flower-selling subculture, through Florida's swamps and beyond, along with the Seminoles who help him and the forces of justice who fight him. In the end, Orlean—and the reader—will have more respect for underdog determination and a powerful new definition of passion.

In this new edition, coming fifteen years after its initial publication and twenty years after she first met the "orchid thief," Orlean revisits this unforgettable world, and the route by which it was brought to the screen in the film Adaptation, in a new retrospective essay.
Look for special features inside. Join the Random House Reader's Circle for author chats and more.

Praise for The Orchid Thief

"Orlean's gifts [are] her ear for the self-skewing dialogue, her eye for the incongruous, convincing detail, and her Didion-like deftness in description."—Boston Sunday Globe

"A swashbuckling piece of reporting that celebrates some virtues that made America great."—The Wall Street Journal
From the Trade Paperback edition.
Biography & AutobiographyNatureTravelNonfiction

Susan Orlean has been a staff writer for The New Yorker since 1992 and has also written for Outside, Esquire, Rolling Stone, and Vogue. She graduated from the University of Michigan and was a Nieman Fellow at Harvard University. She now lives in L...

More about Susan Orlean
The Orchid Thief
Copy and paste the code into your website.
New here? Learn how to read digital books for free