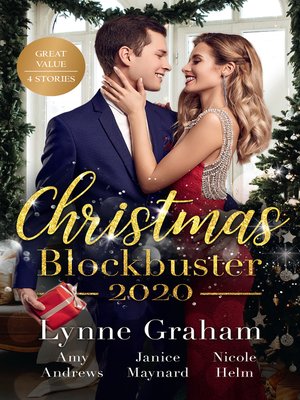 Christmas with a Tycoon

Italian tycoon Vito Zaffari is waiting out the festive season while a family scandal fades from the press. So he's come to his friend's snow covered English country cottage, determined to shut out the world. Until a beautiful bombshell dressed as Santa literally crashes into his Christmas!

Innocent Holly Cleaver sneaks under Vito's defences — he wants her like no other before and decides he must have her. When Vito finds her gone the next day, he's sure she'll be easy to forget...until he discovers that their one night of passion has a shocking Christmas consequence!

Her knight in shining leathers!

Trinity Walker has learnt the hard way to stand on her own two feet for her sick son Oscar. But, when ex-army surgeon Reid Hamilton walks into her life and offers her a job and a home, she can't refuse!

He might ruffle her feathers, but Trinity can't help falling for the knight in motorbike leathers. Reid never expected this little family to bring such sparkle into his cynical life but now he'll do whatever it takes to give Trinity the love she deserves this Christmas!

This bachelor boss gets a little holiday surprise...

Being stranded with her crush-worthy boss isn't part of Dani Meadows's job description! But she and sexy CEO Nathaniel Winston are snowbound for Christmas...along with an adorable baby who might be Nathaniel's daughter.

Nathaniel needs Dani's help. But his fantasies about his executive assistant are nowhere near as hot as the reality of having her in his home...and in his bed. When the snow melts, will he be able to say goodbye?

'You don't have to trust me, Texas Ranger. You just have to stay out of my way.'

Bennet Stevens will do anything to prove himself. But the Ranger never expected a cold case lead like Alyssa Jimenez, a wild-card bounty hunter. Or that someone would target her. The only safe place she can hide is in Bennet's elite world. But Alyssa's gutsy maneuvers and surprising vulnerability are putting Bennet's heart at passionate risk...

Alyssa barely survived her drug-cartel family's machinations. She knows all too well that trusting anyone can get you dead. Still, Bennet is the only way she can finally put her mother's unsolved murder to rest. But posing as his lover is seductive — and risky. And exposing the truth could guarantee they won't live to celebrate Christmas.

Christmas with a Tycoon